Mild temperatures, clear skies and empty slopes make spring a fantastic time (arguably the best) to visit Niseko. We’ve put together 5 of the most important tips for great spring skiing. Grab the sunscreen, the sunglasses and get out there! 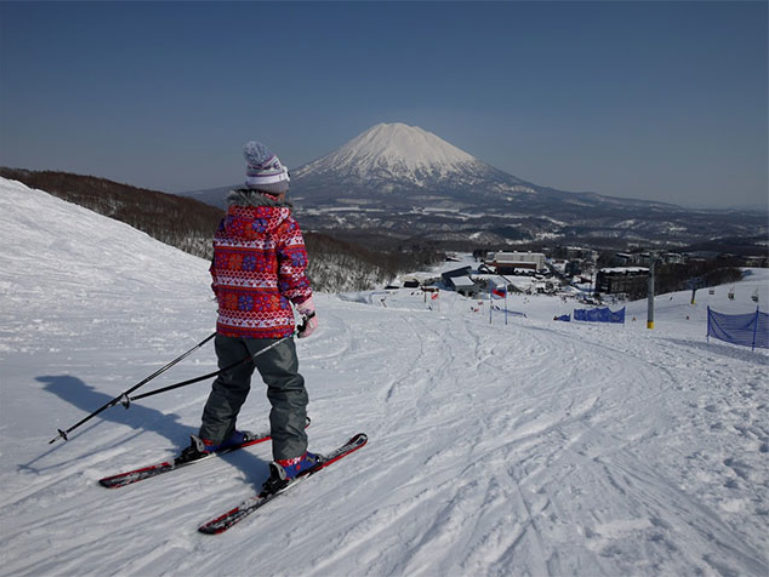 Make the most of the cooler early morning temperatures and ski the runs lower down the mountain early on in the day while they’re still firm. As the sun moves higher in the sky and the freezing level starts to rise, push further up the hill for the better snow.

#2 Stay on the Marked Runs

Niseko is a powder skier’s heaven, but when the temperatures rise, the quality of the snow changes dramatically. Heavy, slushy snow is hard work and not usually great to ski, though you’ll have some success with longer, wider skis.

Instead of chasing the deeper stuff, stay on the marked trails and enjoy the long, cruisy groomed runs. If you’re after more of a challenge, there’s no better time to ski the bumps than when they’re soft and forgiving.

Spending the day out on the snow might seem like a good reason to wear warm, thick clothing. But spring skiing can get surprisingly hot, so make sure you’re wearing lightweight layers that you can remove as the day warms up.

The base layer is especially important. Leave the cotton t-shirt at home and instead start with a polypropylene or Merino wool layer base. Add a mid layer in for the early morning chill, however a light jacket or shell over the top of the base layer is probably all you’ll need for most of the day.

Over the last ten years powder skis have become a very popular choice in Niseko, which is hardly surprising in a place that gets an average of 15 metres of snow annually. That said, skis with a waist of over 100mm are designed for a very specific purpose, and if you’re hitting the groomed runs and bumps on skis built for bottomless powder, your technique will suffer.

Instead, try a frontside or all-mountain ski, which will give you much better performance and are noticeably quicker edge to edge.

Spring is arguably the most beautiful time of the year in Niseko, so don’t forget to pack the camera. During the winter months, it’s easy to forget that you’re skiing in the midst of some of the most stunning alpine scenery in Japan, and just kilometers from the striking Mt. Yotei. In springtime, sunny blue skies and visibility for miles are the norm.

So, what are you waiting for? Book your trip and get ready to experience the magic of Niseko this spring.